Members Log In here, to download new games, levels, upload your high scores and all the other good stuff that members do.

Some people would call this a tetris game but they would be wrong, tetris dreams that there game could be shape shifter.

Race against the clock to destroy different levels.

Race against the clock and an opponent to see who gets to the finish line first.

Play any card game you can think of, a deck of cards for your computer

Card counter, make your own shapes and levels, build and play your own brick buster levels and all the rest that Arcade Convoy has to offer

Shape Shifter is one of the more popular games on Arcade Convoy, mainly because when you see it you will notice that it is the best Tetris game out there (even including those "real Tetris" games that you have to buy. But Shape Shifter is by no means a Tetris game, in a mater of fact I would get offended if I heard someone calling Shape Shifter a Tetris Game.

Warning Rant Alert: Skip if you don't want to hear me bitch about TetrisWhat is the difference you might ask. Well I will tell you, Tetris was a game made in the early 80's that was fun at the time and is one of the most basic games you can make. Which was good in the 80's because it didn't need much processing power. But over the past 20 years what real improvements have been made to Tetris? All I can see and I have played them all: freeware, shareware and the big boys The Tetris Company. All I have seen is the same boring game play with a fancier 3D level, but in all reality the shapes and game play are still extremely basic and has not changed any. Lets face it there is a reason that every game programmer starts off by making a Tetris Game.
There are thousands of Tetris games on the web so why would we put Shape Shifter online if it was just a Tetris game. It gets me mad when I see these crappy Tetris games on line that are no different then if I played the original one on my nes emulator(my nes doesn't work any more). It really got me mad when I bought several Tetris games from the store for my CPU and other gaming systems, and they all pretty much flat out sucked. And then that company sends us a threatening letter from there Manhattan layer telling us that we have to take Shape Shifter out of Arcade Convoy or they will sue us. Well [email protected]*K THAT!
With Shape Shifter we just used a little common sense in thinking what can you do with the standard Tetris game to turn it into an action packed arcade style game. And it seemed pretty simple to us, in a mater of fact I am a little surprised that this company which shall remain anonymous has not added it to their Tetris Game a long time ago. If they had we would not of even made Shape Shifter and they could of saved a little money by not having to pay a layer to harass us. And all they had to do was let more than one shape in the game arena at once.

The first and most important feature we added to Shape Shifter was to let more than one shape play in the game arena at a time. This little change really opens up the game play, which allows for an almost unlimited amount of game types. This can let you play with multiple players in the same game arena, and lets face it, this is a lot more fun than just playing a Tetris game next to your friend playing there own Tetris game. Plus it opens up all kinds of other options, like making the shapes be active or inactive shapes, letting those shapes have there own ghost shapes. Along with dozens of other features, options and cheats that we added to the game which turned it into a completely different game than Tetris.

There are too many features to even talk about in Shape Shifter; like the 3 different scrolling levels, the mentor mode, the smart shadow or wrap around mode. But the best way to see a lot of the features is to look at all the different game types that make up Shape Shifter. Most people will mainly play the convoys and challenges because they are more action packed, fast paced and just flat out fun. But the backbone of Shape Shifter is the over 40 game types. The convoys and challenges are basically just playing a Shape Shifter game where the game type can change at any time.

If you would like some more information on shape shifter then click on one of the pictures bellow to read a little about the different game types in Shape Shifter. 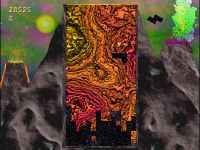 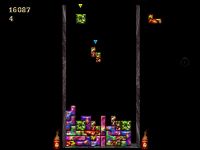